I’m home today on Election Day. Students have the day off so teachers like me can complete the first quarter report cards.
I voted.
I posted my grades.
It was pouring rain.
So with some time on my hand, I thought I’d write.
But I’m not sure what to write.

Then I started looking back at earlier posts.
And I reread what I wrote on June 4th – Midway Relfection.

However, I think I already know my 2019 Word! I had the pleasure of attending a Book Signing at my public library by Kwame Alexander. He was promoting his newest book, Swing. 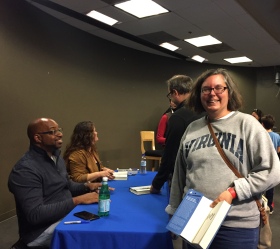 During his Q&A, a kid asked him about rejection and what keeps him going when he is rejected. I loved his answer. He admitted that not all love his books and he has received LOTS of rejection letters or unfavorable book reviews. Then he shared his secret. He says he knows he is great! “I am arrogant in my appreciation of myself.” He suggested that if we always believe in ourselves, what others think won’t matter. We just need to be arrogant and say, “I’m great!”

That word, arrogant,  stuck with me for hours after the book event. And now, weeks later, I still think about “being arrogant”. Before Kwame, I think I saw only negative conotations with being arrogant. But now I understand how my belief in myself can be the goal. Though it is only Nov. 6 – Election Day, I do think my 2019 word, inspired by author Kwame Alexander, will be arrogant. Hmm…can it be an adjective and not a verb?? Well, be January 1st, I can decide…now how about 2018? How am I doing?

As for ACTIVE – this word is serving me well.
I need to be more active physically.
I’ve been very active in my professional development. This summer I wrote curriculum, have a summer virtual book club and now am getting MS teachers and 6th graders to visibly show in their Reading Notebook the invisible thinking they are doing while reading and viewing.
I also am guiding  a group of teachers to do Action Teacher Research and I got my county to give us recertification points for our work!
I’m staying active in my writing life and actually writing LOTS about my teacher research question which is: What is Personalized Learning and how will it look in a 6th grade Reading classroom? I’ve been asked to record video reflections as the year goes on so I try methods related to Personalized Learning and record what I think. So I’m both writing and orally sharing my story. Can’t wait to see what I figure out!
And I’ve been active in my reading life. Reading books like Swing and meeting authors and reading their books. I love that my homework is to read!!

And I still have the rest of November and December to be ACTIVE!

I’m feeling pretty arrogant in my appreciation of how great I am at being reflective and focused on staying ACTIVE!!!!!

PS – Did you VOTE?!! Here’s what my daughter’s outfit was today: 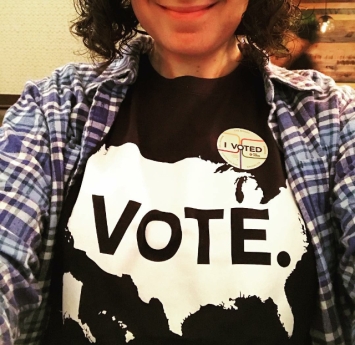 Google Maps indicated the Ashburn Barnes and Noble was 23 miles away from my house in Arlington and it would take me 41 minutes to drive there. Despite being exhausted all day on Monday, April 30th because over the weekend I helped with our Middle School play (helped meaning being at school on Friday until 5pm, Saturday from 10am -9:30pm and Sunday from 11am – 7:30pm while my students performed three shows of The Lion, the With and the Wardrobe. ), I still wanted to go. So once school ended, I headed west.

After following the voice on my app, I found the Barnes and Noble. I sat in the second row of the chairs and saved a seat for my friend who was on her way. A little after 5pm, the BUS arrived!

Then Kwame worked his magic!! As he talked to the crowd, I learned this was his last bus tour stop. For the last 30 days, he has been on this amazing bus that looked like the Rebound Book cover to promote his newest book. He lives just down the road in Reston so it made sense that he’d end here. So glad I made the trek!

Kwame read his poetry. Randy played background guitar music. Kids were called up to play a game – as Kwame read a poem, he’d leave out a word and the kids would fill in the blank. ALL won t-shirts! We learned he is working on a book about a character who plays tennis titled, Love.  He ended having us ALL repeat after him in song…

Be a star.
In your mind.
Day and night.
And let it shine!

As I was outside the store about to head home, I noticed the boys who were sitting in front of me. They were being guided onto the bus. I was so jealous! I watched as his brother and mom stepped onto the bus and took a look. As they returned to the sidewalk, I went up to them and asked, “How did you get to go on the bus?”

The boy replied, “My mom made me bring my report on Kwame and when he saw it, he said we could get a look. I didn’t want to bring it but my mom made me,” he answered.

I love meeting children’s authors!
They are rock stars in my book!!