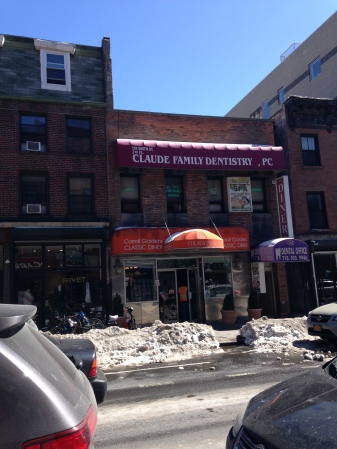 We stepped out of the Brooklyn Hotel lobby and heading down the street.

“I’m so glad you know where we were going. It saved me from having to look it up,” I told my daughter.

“It’s weird to be walking on this street again. This was my route every day when working on the campaign,” she recalled. “I also checked and there’s a deli right across from the school.”

“Perfect! I told my friend I’d bring lunch for us to eat!” As we walked quickly amongst the morning crowd, I saw a sign advertising a dentist. “Remember that blog post I told you about – the one where the guy’s mom was one of 14 kids. He also wrote about how her dad was a dentist. It was during segregation but he took anyone as a patient, sometimes they only paid a dollar. And somehow he raised 14 kids and made it all work.”

“That reminds me of the lady who recently gave me a pedicure. She told me she was one of 12 kids. She said her mother loved it. She never had to do any chores because she had a job chart and all the kids took turns cooking and cleaning. She said now that her kids are all older, she loves it, too. When she wants to do go on vacation, she starts to call each kids, asking to borrow money. Once she gets to the 12th, she is set!”

We kept walking and chatting. It was fun to be in a new neighborhood and have a whole free day ahead of us. My first stop was a school where my friend now worked and then a trip to the Brooklyn Museum for fun. My daughter was off to meet a friend she recently worked with. We both enjoyed being in Brooklyn on a March morning, walking on sidewalks still lined with snow from Tuesday’s storm, and breathing the fresh air on a clear, blue sky day. 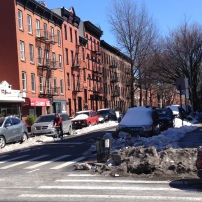 “What is that?” I interrupted my daughter who was telling me about her new job as we took a walk in her new Brooklyn neighborhood. I was pointing to the playing field across the street at Prospect Park. And I was thinking,  That is the craziest sport I had ever seen.”

Similar to a soccer game – 2 teams, 2 goals, 2 refs, and a ball. Yet, so crazy looking with the players moving inside a giant bubble! “Who thinks up this kind of stuff up?”

I showed my husband this picture once I returned home and his curiosity led him to send me an email from work on Monday that read:

Turns out it’s a thing.  You have to watch this video:  Soccer is even more fun in a bubble

When I forwarded his email with my daughter, she replied with this email:

Check it out: http://bubbleballsoccernyc.com/    Pick-up games are $65 PER PERSON!
Now that I discovered a new sport called Bubble Soccer, any takers to join the next pick-up game?? I know where we can find one in Brooklyn!! Or maybe we all start a league in our hometown!